You want to protect your baby while you’re expecting.

But you also need to protect yourself so that you’re ready to be the best mama you can be.

If you were to go out into a war zone, you’d want to wear body armor.

Well, the great outdoors is a kind of war zone. You can be bitten and end up with a disease that causes severe harm to you or your baby.

Fortunately, you have excellent protection available to you. It’s confirmed by scientific studies and decades of research.

What is best to prevent mosquito bites?

The gold standard for preventing mosquito bites is DEET.

Perhaps you’ve heard rumors, and now you’re wondering if DEET is safe to use while pregnant?

Yes, it’s safe for you and your baby. Just don’t exceed a 30% concentration.

Each bottle of bug spray with DEET will tell you the concentration right on the label.

Another effective and pregnancy-safe bug repellent is Picaridin.

You can use Picaridin at up to 20% concentration.

There’s another insect repellent called IR3535, too. It repels body lice as well as mosquitoes (1).

You’ll see examples of each of these bug repellents in the reviews below.

Please stay away from “natural insect repellents” if you don’t want insect bites during pregnancy (2).

As tempting as it is to try essential oils and so forth, that’s like hoping to stop a bullet with tinfoil.

The protection doesn’t last nearly as long, and you could have an undesirable allergic reaction.

Why is insect repellent crucial while you’re pregnant?

So what’s the big deal with bug spray, anyway?

I’m sure you’ve heard of Zika, the virus carried by mosquitoes. It causes babies to be born with microcephaly, which negatively impacts their development or else kills them outright (3).

There are also other illnesses like malaria, Lyme disease from ticks, West Nile virus, and so on. These can cause severe and chronic health problems for you and your baby.

As you can see, it’s about a lot more than avoiding itchy bites.

But what are the side effects of insect repellent?

I’ll be honest with you, DEET gets a bad rap. But some of the rumors are based on confusion with DDT, a toxic pesticide that’s now illegal.

DEET, however, may damage plastics and synthetics. On the other hand, Picaridin doesn’t cause those problems.

If you’re worried about using bug spray, read the CDC’s guidelines or check out the EWG’s research (4).

They specifically talk about which insect repellents are safe during pregnancy. And that’s the information I used to create these reviews.

In the meantime, follow the directions on the label. Apply it only as much and as often as you need it. Then, once indoors, wash your skin.

Should you choose lotion or spray repellent?

Insect repellent lotions last longer than sprays, but you can’t put them on clothing.

On the other hand, you can spray your clothing, and the repellent may last longer there than on your skin.

There’s also a treatment called permethrin for clothing. Skip down to the bottom of the article to learn more about it.

As you shop, take into account how long you need the repellent to work.

Cutter’s pump spray has 7% DEET to keep mosquitoes away. It also defends against biting flies, ticks, gnats, fleas, and chiggers.

The liquid smells fresh and clean. It doesn’t make your skin feel greasy, either.

You can use it on both your children (including babies over two months old) and yourself. The aloe and Vitamin E act like a lightweight moisturizer.

What’s nice about the compact bottle is that it sprays in any direction, including upside down. 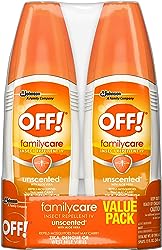 OFF! also makes a pump spray with a low concentration of 7% DEET. It keeps a variety of biting insects away.

You can spray it onto pants, socks, and hats as it won’t damage cotton, nylon, or wool.

Moreover, it’s an unscented product with aloe to soothe the skin.

It doesn’t have a fragrance, and the texture feels dry, not oily.

Apply it to clothing and skin to keep mosquitoes, flies, ticks, gnats, and chiggers from biting.

Be sure to reapply at the appropriate time to maintain the protection. The label indicates how many hours it lasts.

This lotion provides up to 11 hours of protection. It contains 20% DEET.

The DEET is encased in protein that slowly dissolves. That’s why the protection stays consistent and endures for so long.

Happily, the lotion doesn’t have any scent at all, which is excellent for combating morning sickness.

It stands up to sweat, yet doesn’t feel greasy.

You can also wear it with sunscreen. Apply sunscreen first and let it sink into the skin. After about 10 minutes, you can apply the insect repellent. Sawyer makes a Stay-Put sunscreen that’s specially designed for this purpose.

OFF!’s 15% DEET spray is a powder-dry aerosol. You can apply it to skin and clothing.

Let’s take a detour to find out how DEET works.

It turns out that it messes up the mosquito’s ability to detect food. It’s like camouflage for humans.

What it does is stop their antennae from sensing carbon dioxide and lactic acid.

The barrier fools mosquitoes into thinking that there’s nothing for them to eat so that they don’t even land on your skin.

Instead of a spray or lotion, some people prefer wipes. After all, wipes are travel-friendly.

They fit into a diaper bag or your carry-on. There’s no leaky mess, and airport security won’t complain about the liquids.

This package of 15 wipes has the maximum recommended concentration for pregnant women, which is 30% DEET. They come in a resealable pouch.

Once you apply it to your skin, it will give you all-day protection from mosquitoes, fleas, chiggers, and ticks.

With this spray at 20% concentration, Picaridin defends against mosquito and tick bites for up to 12 hours. Then, it protects against biting flies and chiggers for up to eight hours.

It won’t damage clothing, watches, sunglasses, synthetic fabrics, or backpacks. In fact, it’s Consumer Reports pick for people who like to fish.

You can also get 20% Picaridin in an aerosol that protects against mosquitoes for up to 12 hours and chiggers for up to eight.

(Only the lotion provides more extended protection than the spray.)

Speaking of lotion, here is the longest-lasting defense against bug bites.

Apply it, and you’ll have 14 hours of protection against the mosquitoes and ticks and eight hours against chiggers and gnats.

The manufacturer claims that it’s more effective against biting flies then DEET is.

The lotion is fragrance-free and doesn’t leave an oily residue. It’s safe for synthetic fabrics and coatings as well as plastics, unlike DEET.

Here’s a pump bottle that sprays a fine mist of Picaridin. The effects last up to 12 hours for ticks and mosquitoes.

It’s safe for children over one year old as well as pregnant women.

Plus, it has a pleasant citrusy fragrance that isn’t overwhelming.

Avon’s bug spray with 10% Picaridin has been dermatologist-tested for sensitive skin.

It’s infused with aloe and vitamin E to act as a soothing moisturizer.

For best results, never put it on freshly-shaved, sunburned, or irritated skin or on open cuts. Also, don’t put it on more than twice in 24 hours.

If you need longer protection than that, get a formula with a higher concentration.

The formula repels mosquitoes up to eight hours, midges in sand flies up to six hours, and black flies up to three hours.

Here are individually-wrapped wipes with 20% Picaridin. They have a floral scent.

Wipes are handy because you never have to worry about overspray or missing a spot.

Here’s the product you need the next time you go camping or head to the beach.

This version of Avon’s Skin-So-Soft lotion is a combination of sunscreen and bug repellent. It has a “Gentle Breeze” fragrance.

Anyone six months of age or older can enjoy it. But Avon recommends keeping it off the hands of little children who may put it in their mouths.

It contains both aloe and vitamin E as it’s an actual moisturizer. It’s also water-resistant up to 80 minutes.

Unlike products with DEET or Picaridin, you can apply it up to nine times per day. (It seems like most other bug repellents are limited to two or three times at the most.)

If you prefer an unscented version, here’s an aerosol version of Skin So Soft.

Luckily, it’s also a sunscreen, not just a bug repellent.

As you can see, the active insect repellent ingredient is IR3535. That’s the short name for 3-N-butyl-N-acetyl}-aminopropionic acid, which is a patented formula.

Meanwhile, the active sunscreen ingredients include octocrylene, octinoxate, oxybenzone, and octisalate. While these chemicals aren’t ideal for pregnant women, occasional use is not necessarily a problem. Check with your OB/GYN to be sure.

The sunscreen is water-resistant up to 80 minutes in the water.

At the beginning of the article, I mentioned permethrin. It’s bug spray specifically for clothing, tents, backpacks, sleeping bags, and outdoor gear.

It is not made for the skin.

If you’re reluctant to put insect repellent on your body, at least permethrin on your clothing will shield you to some extent.

It’s a synthetic ingredient derived from the chrysanthemum plant. It’s been worn by US soldiers on their uniforms for three decades.

What’s interesting is that you only need to spray it once on your clothes, and the effects will last up to six weeks.

You can even wash the clothes on the gentle cycle, and they will retain their ability to repel mosquitoes, ticks, and chiggers.

It’s not just a bug repellent, but rather a pesticide. It disrupts the nervous system of ticks or mosquitoes. If they land on the treated fabric, they die. 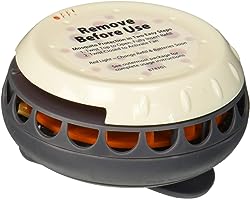 Reputable manufacturer OFF! has developed an odorless mosquito repellent housed inside a battery-powered fan. Keep it close to you while you’re sitting on the porch.

Each time you refill it, it fends off bugs for up to 12 hours. But you must use it within 14 days of opening the refill package.

It requires AAA batteries to operate. Luckily, the LED will glow red when there are only about three hours left.

Defend yourself and your unborn baby by wearing pregnancy-safe insect repellent.

It’s a must-have every time you’re outdoors if you live in a high-risk area.

Happily, for pregnant women everywhere, mosquito repellent has been extensively tested and proven to be harmless–at least to humans.

If you have a favorite bug spray, tell us about it in the comments below.

Advertiser Disclosure: Momhaul.com is a participant in the Amazon Services LLC Associates Program, an affiliate advertising program designed to provide a means for sites to earn advertising fees by advertising and linking to Amazon.com. As an Amazon Associate we earn from qualifying purchases. Additionally, Momhaul.com participates in various other affiliate programs, and we sometimes get a commission through purchases made through our links. Amazon and the Amazon logo are trademarks of Amazon.com, Inc., or its affiliates. We do not specifically market to children under 13.